Turkey: is it still our ally? 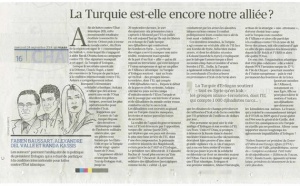 In order to fight the Islamic State, that totalitarian monstrosity that intends to subdue the Middle East and in the end, the entire world, ten countries in the region have signed the « Jeddah Communiqué », in which they commit to helping Barack Obama in his campaign against the Islamic State (IS). One signature was missing from this appeal: Erdogan’s Turkey. When the American Secretary of Defense, Chuck Hagel, attempted to convince Turkey to participate in the international coalition against the IS, Ankara categorically refused.

Disrupting the fundamental Atlantic solidarity, Ankara has refused to let American or NATO planes take off from Turkishairstrips, yet they are the most operational to reach Iraq. Remember that the Turkish air force has the latest technology issued from the American military industry, that its pilots are trained by the United states and that Turkey houses 24 NATO bases. The official explanation put forward by Recep. Tayyib Erdogan was, until September 20th, the fate of the 46 Turkish prisoners captured at Mossoul by the IS in July. We know today that they were freed in exchange for Turkish aid to jihadists who are fighting Kurds in Syria. The pretext of the hostages has served to mask another reality, totally unacceptable from an « allied » country that says it is opposed to terrorism, that wants to join the European Union and that is a pillar of the Atlantic Alliance: the Turkey of neo-Sultan Erdogan supports terrorist groups both in Syria and Iraq- islamo-terrorist groups including the IS which has 1000 Turkish jihadists. Since the beginning of the Syrian civil war, Ankara has closed its eyes to the IS training camps in Syria and the passing through its territory of weapons and of jihadists from all over the world coming to fight in Syria or Iraq. The jihadists are recruited in Turkey in broad daylight, in mosques, schools and even among the security forces. The reality of the Turkish government support of the IS is denounced by the Turkish opposition itself (the CHP party-Republican People’s Party) which deplores the fact that its country has become the safest breeding ground for the IS, one of whose components, the powerful Islamist Brotherhood of the Naqshbands, is very close to the AKP and to Erdogan.

Would the neo-Sultan turk hate the Alawite Bachar al-Assad even more than he fears the IS? Or would he bluntly stand together with the jihadists (nostalgic like him for the « Califat ») who are fighting the secular Alawite Syrians with weapons, like he is politically fighting their Alevis Turkish cousins who are just as « infidel »?

These last few weeks, Turkey has acted like a true ally of the IS facing the Kurds of Syria who are, alas, much less armed and whose recent defeats in Kobane (northern Syria) are explained by the fact that the Turkish army delivered at least 5 tanks and numerous heavy weapons to the IS. Finally, Turkey has also refused to stop the smuggling of hydrocarbons from Iraq and Syria when the dozens of oil fields and refineries in Iraq and Syria controlled by the IS generate 2 million dollars a day. No one can deny anymore Erdogan’s ambiguous role and his support of the IS.

The United States and NATO, so prompt to denounce Russia in the Iranian nuclear files or the Ukrainian crisis, should display as much caution vis-à-vis a country that has much fewer excuses not to play the game of western solidarity since it’s a major member of NATO. Facing a danger as serious as the Islamic State, Erdogan and his Prime minister Ahmet Davutoglu, architect of the « neo-ottoman » strategy, must choose sides: either Turkey remains a member of the Alliance and so participates in the coalition against the IS, ceasing to deliver it weapons, or it continues to act as an ally against the worst enemy of democracies since the 3rd Reich and the USSR, and leaves NATO. For its part, the Atlantic organization must be more coherent: since 1974 it has tolerated the Turkish invasion of 37% of the island of Cyprus-though a member of theEuropean Union-then the permanent violation of the borders of Greece (though a member of the Alliance), notably on the Aegean Sea. The Atlantic organization can no longer tolerate the Ankara support of the jihadists that the Kemalists themselves denounce. France, which joined NATO’s Integrated Command in 2009 after leaving it in 1966 under General De Gaulle, must take the consequences if Turkey doesn’t clarify its positions. Are we going to put up with the unspeakable machinations of Erdogan much longer ?

*Fabien Baussart, president of the Center of Political and Foreign Affairs (CPFA),

***Randa Kassis, president of the Mouvement for a Pluralistic Society.